Lots of us write short stories. But when we think of making money from our writing, we tend to get hung up on the idea of publishing a novel—or, better yet, a series of novels.

Short stories are ways to explore new ideas and techniques and can serve as giveaways for our email newsletter readers, but they don’t pay the bills, right?

For a long time, short stories were actually a fiction writer’s best way to break into paying work, and they can still form a strong part of your author career. Selling short fiction into paying markets nets you exposure, new readers, and, oh yeah, some cash!

The truth is you can find a short story publisher if you know where to look. 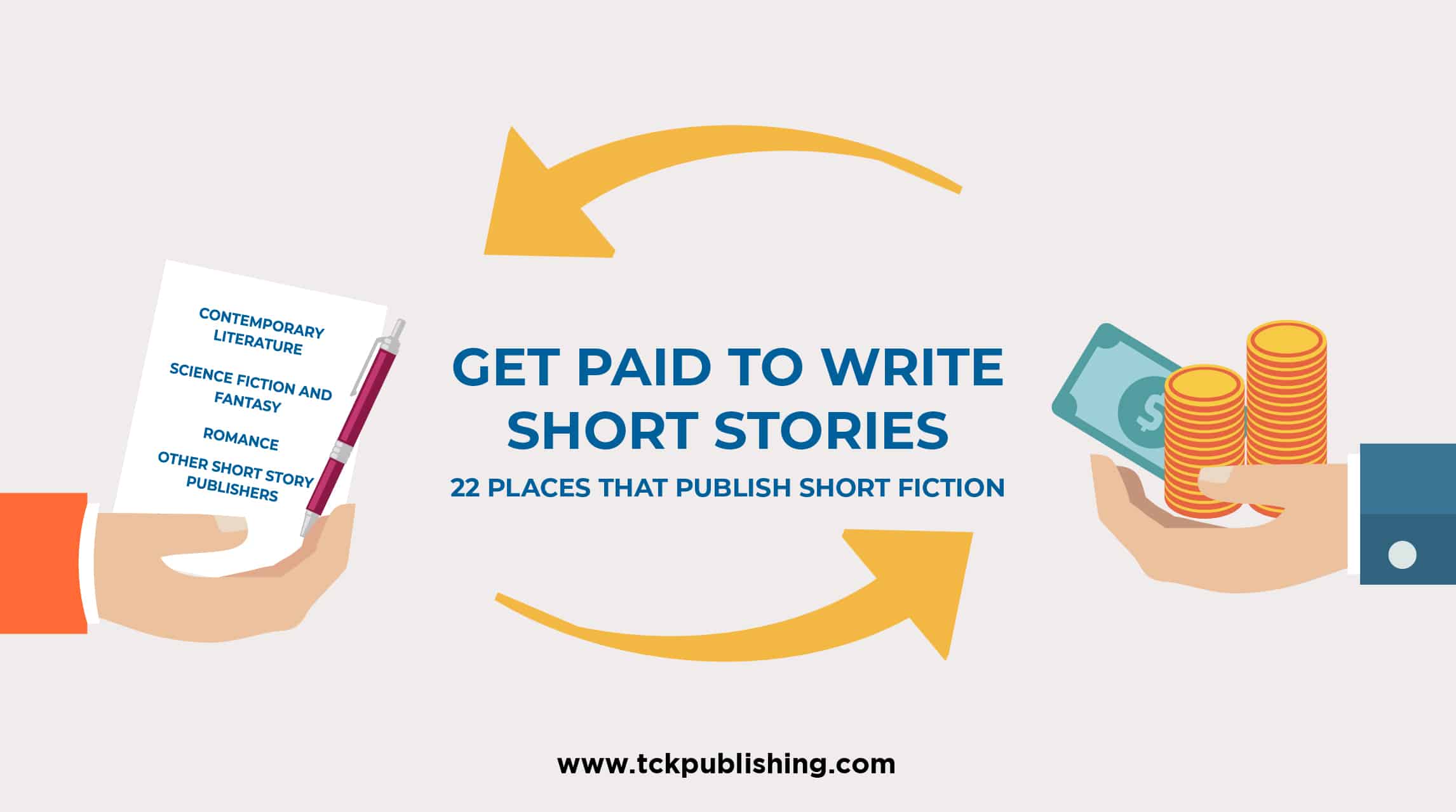 How to Get Paid to Write Short Stories

Most literary magazines and fiction markets don’t pay much for short stories, but it never hurts to add another tool to your kit, giving you another distribution channel and a way to bolster your professional career.

There are new literary magazines opening all the time, especially online, and so it’s impossible to come up with a definitive list of all the paying markets currently accepting submissions—especially when you realize that there are dozens of venues for every imaginable genre.

Writers who are really interested in focusing on the short fiction opportunities out there might want to subscribe to Duotrope, Poets & Writers, or Writer’s Market to get more ideas of where to submit.

In this blog post, we’ll take a look at 22 of the best paying markets we’ve found for short fiction and what they’re paying for submissions right now.

About: The literary magazine of Boston University, AGNI specializes in publishing emerging authors. It accepts poetry, short contemporary fiction, and some critical essays or other nonfiction. There are two print magazines per year and other fiction is published online biweekly.

You can submit between September and May every year.

Pay: $10 per printed page for fiction, $20 per page for poetry, plus a year’s subscription to the magazine and several copies of the issue.

About: Black Warrior Review is the graduate English department publication of the University of Alabama and is produced twice a year. This literary magazine seeks to embrace diversity and risky fiction; it welcomes both authors and stories with diverse backgrounds, including LGBTQ, (dis)ability, and people of color. Although it prefers contemporary fiction to strict category genres, magical realism and futuristic stories are encouraged—anything that pushes boundaries and encourages deep thought is embraced.

Pay: One-year subscription and a “nominal lump sum fee,” the amount of which isn’t made public.

About: Another longstanding, award-winning journal, Boulevard has been publishing contemporary short stories, poetry, and essays since 1985. It particularly encourages new writers to submit—authors who have already been published in another paying market are actually at a disadvantage here!

You can submit between October and May each year.

About: This literary ‘zine focuses on “honest fiction” published online, but also offers a print magazine that includes poetry, nonfiction, and illustrations. One unique feature is that the editors frequently respond to submissions with editorial critiques instead of just a rejection note.

About: Glimmertrain champions new and emerging writers in its three annual issues. The magazine has several different submissions periods each year; check the website for details on what they’re currently looking for (categories often include unpublished writers, super-short fiction, and various topical themes).

About: Part of the prestigious University of Iowa writing program, this journal has been around since 1970 and specializes in publishing fiction, poetry, and creative nonfiction in a variety of styles. It publishes three times a year and accepts submissions in September, October, and November each year.

About: Another journal that welcomes contemporary fiction, poetry, and nonfiction essays, The Missouri Review has been around since 1978. It publishes four issues per year and frequently publishes new writers.

About: Published three times a year as a high-quality paper journal, Ploughshares is one of the most respected literary journals in the world. They accept submissions during a particular window, usually from June through January each year. Contemporary literary fiction is preferred. There’s also an annual Emerging Writers Contest for previously unpublished or self-published writers.

About: The Southern Review publishes contemporary fiction, poetry, and selected nonfiction including essays and book reviews. Submissions are accepted between September and December each year.

Pay: The Southern Review pays $25 per page, with a maximum of $200. It also provides two copies of the magazine and a year’s subscription.

About: Pitched as a “general literary publication,” Threepenny Review publishes contemporary literary fiction, poetry, and a wide array of essays and other nonfiction. It publishes four times a year, in print and online.

About: Analog publishes a wide range of science fiction, including welcoming hard science fiction. The technology, worldbuilding, and characters and plot must all be believable and seamlessly woven together—no tacking a plot on to a really cool world. New writers are encouraged to submit.

About: Do you write edgy sci-fi, fantasy, or horror? Check out Apex! They actively seek boundary-pushing speculative fiction for their monthly online issues, which are available through a hybrid combo of free online access and paid eBook editions. Many now-famous writers got their start with Apex, which still regularly publishes new authors.

About: One of the most prestigious science fiction magazines around, Asimov’s concentrates on character-driven, rather than technology-focused, science fiction. Stories should “examine or illuminate some aspect of human existence.”

About: Clarkesworld has won just about every award out there, and stories published in its pages also regularly win awards. It publishes monthly issues and also publishes story collections through its book program.

Clarkesworld welcomes fantasy, sci-fi, and horror of many types, but they have a long list of themes that they see too often; check it out before you submit.

About: Another longstanding, award-winning publication, Fantasy & Science Fiction accepts a broad range of speculative fiction, although stories should be focused more on characters than worldbuilding or technology. Science fiction and humor are particularly encouraged. The magazine publishes six issues per year.

About: Giganotosaurus likes long short fiction—yes, kind of an oxymoron, but unlike many markets, they welcome submissions ranging all the way up to 25,000 words. All kinds of sci-fi and fantasy are accepted, and a single story is published online every month.

About: Every week, Strange Horizons publishes a broad range of speculative fiction, including horror, sci-fi, and fantasy—if you can imagine it, they’re probably open to considering it. They also produce podcasts of published stories and accept poetry, media reviews, and some nonfiction.

Submissions regularly open and close, so be sure to check the website to make sure they’re currently reading for your preferred category.

East of the Web

About: East of the Web publishes a huge array of short stories across all genres, including romance (crime, sci-fi, fantasy, and children’s stories are also welcome). It has an open submissions period for most genres.

Romance stories here should include a thriller or mystery element. Previously published stories will be considered.

About: Heroes & Heartbreakers is actually an imprint of the publishing giant MacMillan. However, it specializes in short stories and novellas in the romance genre, making it a great place to get paid to start your romance writing career.

About: This quarterly print and digital magazine emphasizes diversity, including stories by and about people of color. It publishes short romance stories as well as tips and tricks about writing and motivational or inspirational nonfiction. Any genre of romance is acceptable, though erotica is not.

About: The shortest of short stories are welcomed at Flash Fiction Online, a digital publication. Pretty much any fiction story between 500–1,000 words will be considered, including science fiction, fantasy, romance, and literary fiction.

About: Do you write flash fiction? Then The Vestal Review is the place for you! It’s the oldest established market for super-short fiction (they only take stories of 500 words or less). It accepts every genre except children’s lit and hard science fiction and publishes twice a year in print, with some stories also published online.

You can submit between February and May and again between August and November each year.

Pay: $25 flat fee per published story, plus one copy of the magazine.

There are many, many more paying short story venues out there—no matter what, there’s a home for your work. Or you could always consider self-publishing your stories. When creating your author career, there’s no wrong choices, only what’s right for you.

Short fiction can help you attract readers and increase your author income. See what strategy might be right for you!

For more on building your fiction writing career, read on: