As it turns out, Hemingway never actually uttered those words that are so famously misattributed to him.

Now, whether or not you still think that is sound advice is completely up to you.

However, there is no shortage of wise words out there from literary heroes who (thankfully) persevered through writer’s block, rejection, and so much more.

Below are 75 inspirational quotes about writing to keep you going. So, pour yourself another cup of coffee and get that pen ready. “You can always edit a bad page. You can’t edit a blank page.” 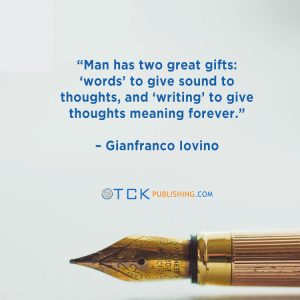 “Man has two great gifts: ‘words’ to give sound to thoughts, and ‘writing’ to give thoughts meaning forever.” “If there is a book you want to read, but it hasn’t been written yet, then you must write it.” “What is written without effort is in general read without pleasure.” “Your intuition knows what to write, so get out of the way.” “To get the truth, you want to get your own heart to pound while you write.” “A professional writer is an amateur who didn’t quit.” “I can shake off everything as I write; my sorrows disappear, my courage is reborn.” “If I waited for perfection… I would never write a word.” “To live a creative life, we must lose our fear of being wrong.” “If it’s still in your mind, it is worth taking the risk.” “There is no real ending. It’s just the place where you stop the story.”

“The first draft is just you telling yourself the story.”

“We’re past the age of heroes and hero kings. … Most of our lives are basically mundane and dull, and it’s up to the writer to find ways to make them interesting.”

“Write. Rewrite. When not writing or rewriting, read. I know of no shortcuts.”

“Genius is the ability to put into effect what is on your mind.”

“If you wait for inspiration to write, you’re not a writer, you’re a waiter.”

“There is no greater agony than bearing an untold story inside you.”

“There is nothing to writing. All you do is sit down at a typewriter and bleed.”

“This business of being a writer is ultimately about asking yourself, how alive am I willing to be?”

“A writer is by nature a dreamer.”

“The writer is an explorer. Every step is an advance into a new land.”

“There are three rules for writing a novel. Unfortunately, no one knows what they are.”

“Words are sacred. They deserve respect. If you get the right ones, in the right order, you can nudge the world a little.”

“I write because I don’t know what I think until I read what I say.”

“A writer is someone for whom writing is more difficult than it is for other people.”

“Remember: Plot is no more than footprints left in the snow after your characters have run on their way to incredible destinations.”

“If you are having trouble getting started, look out the window. The whole world is a story, and every moment is a miracle.”

“Write hard and clear about what hurts.”

“Bad writing precedes good writing, This is an infallible rule, so don’t waste time trying to avoid bad writing. (That just slows down the process.) Anything committed to paper can be changed. The idea is to start, and then go from there.”

“To write something you have to risk making a fool of yourself.”

“Very few writers really know what they are doing until they’ve done it.”

“An idea that is not dangerous is unworthy of being called an idea at all.”

“I do not read for I have renounced life, I read because one life is just not enough for me.”

“When writers die they become books, which is, after all, not too bad an incarnation.”

“I’ve always wondered who I am when I write, because once I’m doing it, I’m not in the room with myself.”

“I write for the same reason I breathe—because if I didn’t, I would die.”

“The purpose of literature is to turn blood into ink.”

“Fill your paper with the breathings of your heart.”

“You just have to trust your own madness.”

“I’m writing a first draft and reminding myself that I’m simply shoveling sand into a box so that later I can build castles.”

“If we encounter a man of rare intellect, we should ask him which books he reads.”

“If you don’t write your books, nobody else will do it for you. No one else has lived your life.”

“I write only because there is a voice within me that will not be still.”

“The two most engaging powers of an author are to make new things familiar and familiar things new.”

“If you want to change the world, pick up your pen and write.”

“Write what should not be forgotten.”

“What lasts in the reader’s mind is not the phrase but the effect the phrase created: laughter, tears, pain, joy. If the phrase is not affecting the reader, what’s it doing there? Make it do its job or cut it without mercy or remorse.”

“The reason one writes isn’t the fact he wants to say something. He writes because he has something to say.”

“Be courageous and try to write in a way that scares you a little.”

“Creativity is intelligence having fun.”

“Painting is poetry that is seen rather than felt, and poetry is painting that is felt rather than seen.”

“Keep your head in the clouds and your hands on the keyboard.”

“It’s none of their business that you have to learn to write. Let them think you were born that way.”

“A blank piece of paper is God’s way of telling us how hard it is to be God.”

“Mistakes are the portal of discovery.”

“I write to give myself strength. I write to be the characters that I am not. I write to explore all the things I’m afraid of.”

“You fail only if you stop writing.”

“If I waited for perfection… I would never write a word.”

“Revision is one of the true pleasures of writing. I love the flowers of afterthought.”

“I don’t wait for moods. You accomplish nothing if you do that. Your mind must know it has got to get down to work.”

“I would advise any beginning writer to write the first draft as if no one else will ever read them – without a thought about publication – and only in the last draft to consider how the work will look form the outside.”

“On first drafts: It is completely raw, the sort of thing I feel free to do with the door shut – it’s the story undressed, standing up in nothing but its socks and undershorts.”

“Editing might be a bloody trade, but knives aren’t the exclusive property of butchers. Surgeons use them too.”

“No author dislikes to be edited as much as he dislikes not to be published.”

“Fiction is an improvement of life.”

“You can’t be a good writer without being a devoted reader.”

“We are all apprentices in a craft where no one ever becomes a master.”

“The true alchemists do not change lead into gold; they change the world into words.”

“Writing is the painting of the voice!”

“Start writing, no matter what. The water does not flow until the faucet is turned on.”

Do you have any favorite quotes about writing? Feel free to share them with us below!